I received this email advising on an experiment with a different SSTV mode I’d never heard of via the ISS voice repeater within 5 days.

I didn’t open the email itself until very late in the week, so I considered the following issues:

To run KG-STV, I used Wineskin:

and created a new wrapper, telling it to install the kg-stv executable. When I ran this executable, set the input source to my virtual audio cable (vbcable) and set my system’s default sound output to vbcable, I was able to decode the test mp3:

With GQRX, I used narrow FM set to voice which works ok on this mode for my purposes: 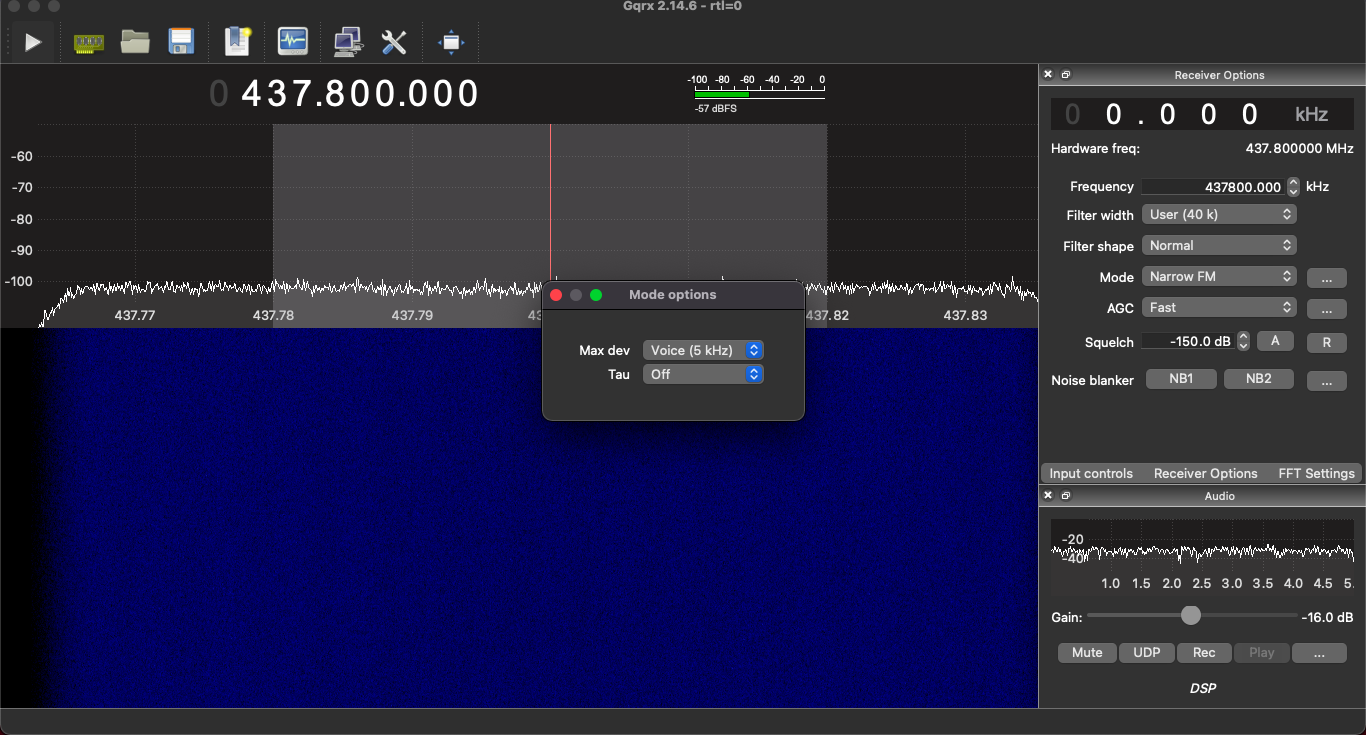 I have a QFH antenna See previous blog post I use for 2m when I want to work NOAA satellites or the ISS APRS digipeater, but this experiment instead takes place on the 70cm UHF band, so I have to hurriedly hack together an antenna in a day or so. I’ll go into less detail around the QFH build here but my previous post covers more concepts.

And this more recent implementation.

So quickly I had to run to the shops or online to scrape together the items for the build, I was limited by time so some of the components perhaps weren’t quite right, and I opted for an RG58 with pre-soldered SMA contacts so I could just cut one end off and wire it into the antenna. 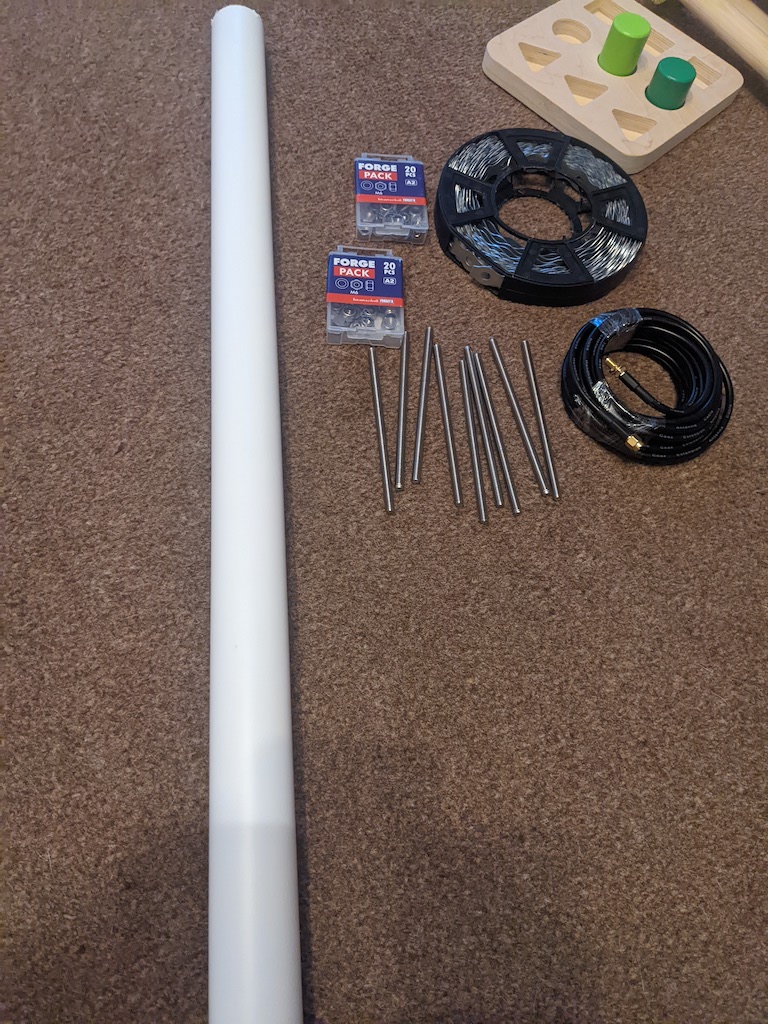 Originally I used the horizontal support struts in the centre like this (out of shot is the balun of wrapped cable): 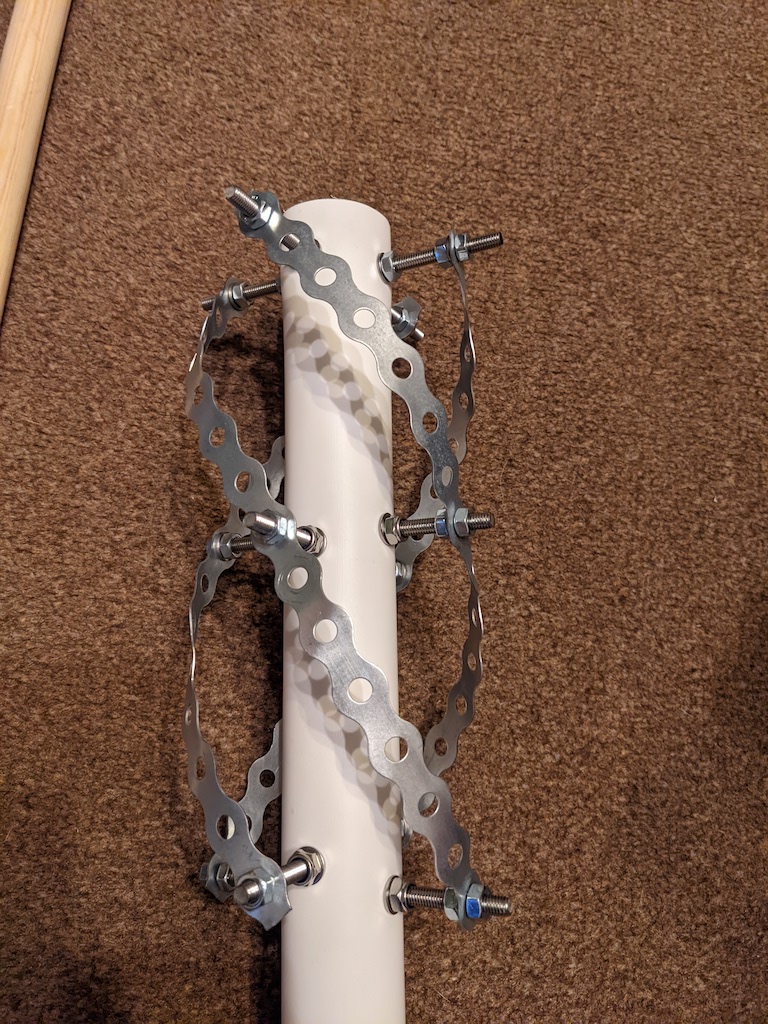 But during the tuning stage I removed them; it only meant more nuts to undo and reapply and could force the elements into unnatural paths since the holes in the metal banding were around 2cm apart (In the future I’d opt for some banding with the holes closer together for fine-tuning, as it is I still had to drill my own)

I soldered terminals to the end of the coax: 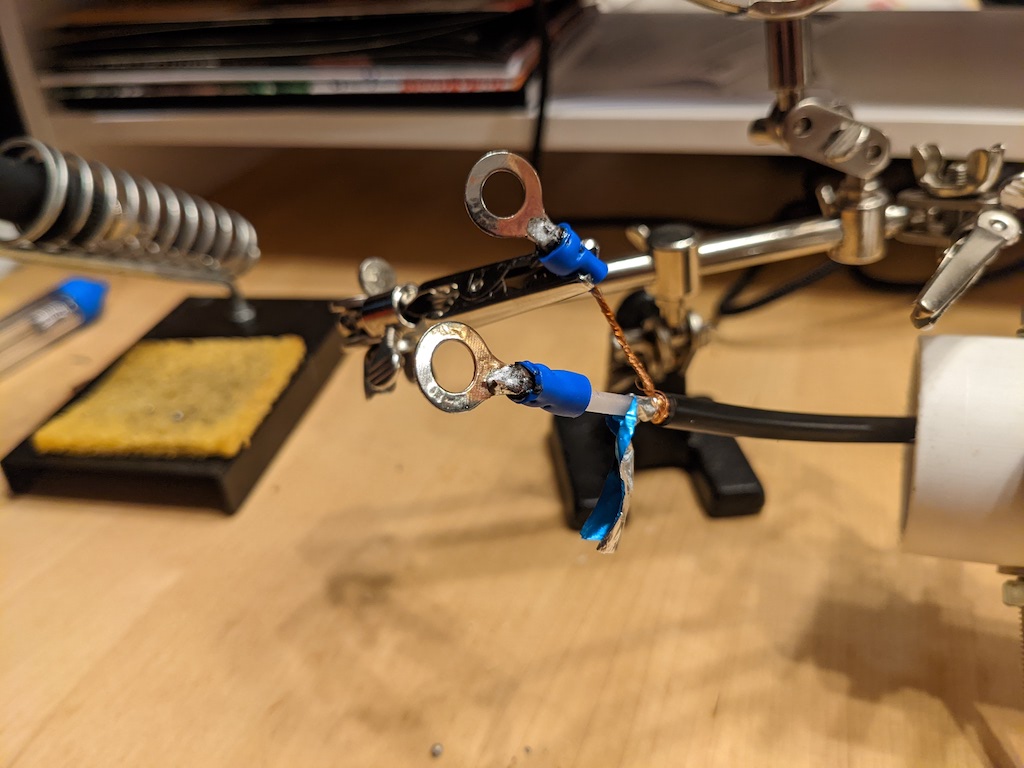 And inside the pvc pipe I joined each rod to the one adjacent using a 2-hole piece of the banding bent into a quarter-circle, then attaching the ring terminal to one of the bolts for each loop. 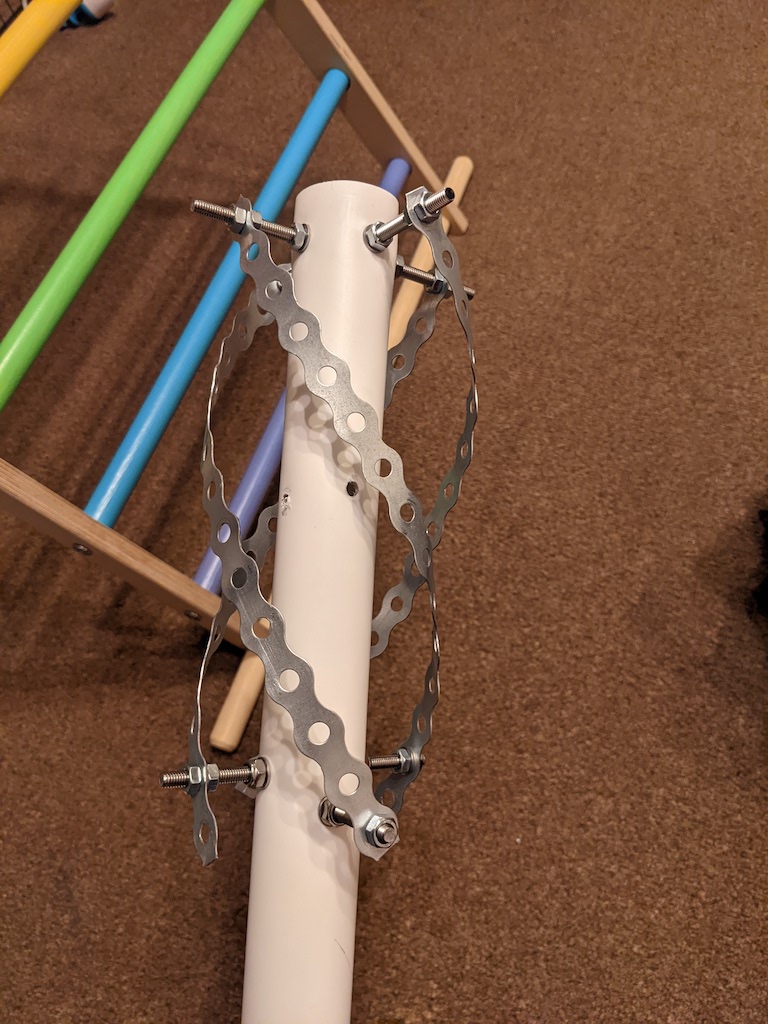 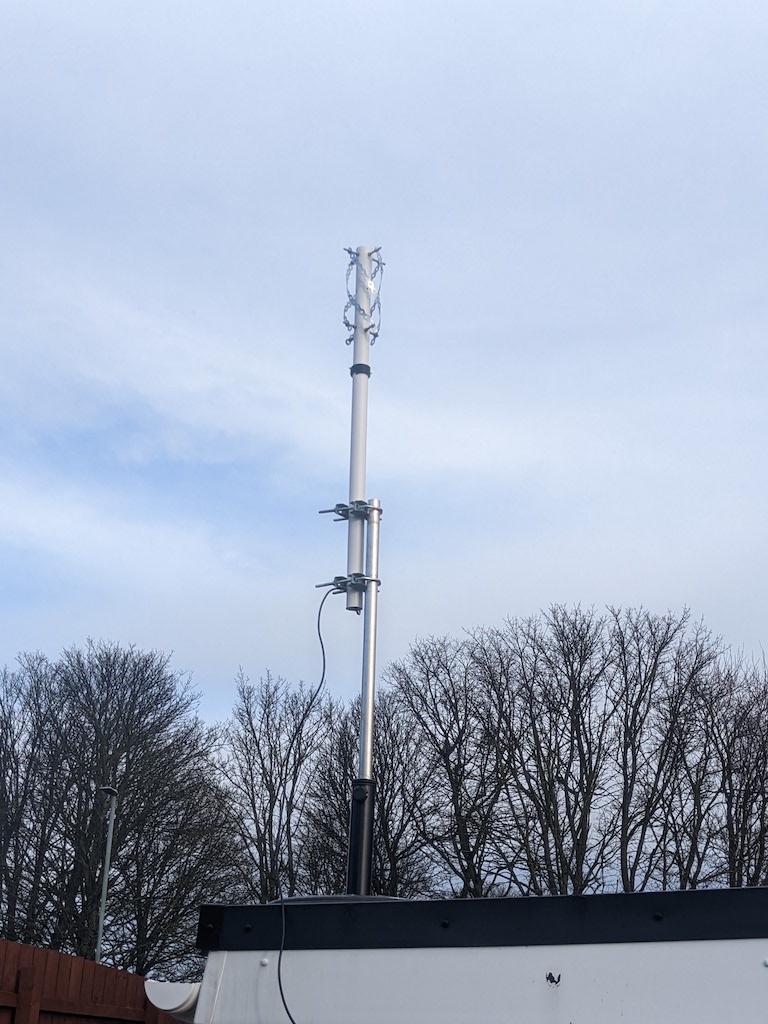 In the end the antenna was ready, and as tuned as I had time to do, though the SWR is abysmal at around 3, but I can fine-tune that when I have time after the experiment.

The KG-STV experiment was confined to 5 passes of the ISS over mainland Europe. At my position in the UK my best option was one borderline awful pass at 39 degrees but unfortunately this is when the wind hit 40mph and the rain was torrential, but as a proof of concept the few pixels I got showed the quick setup has some merit.

Unfortunately also the memo to avoid using the repeater for voice CQs didn’t make it out to some people so there was a lot of doubling over 437.8MHz 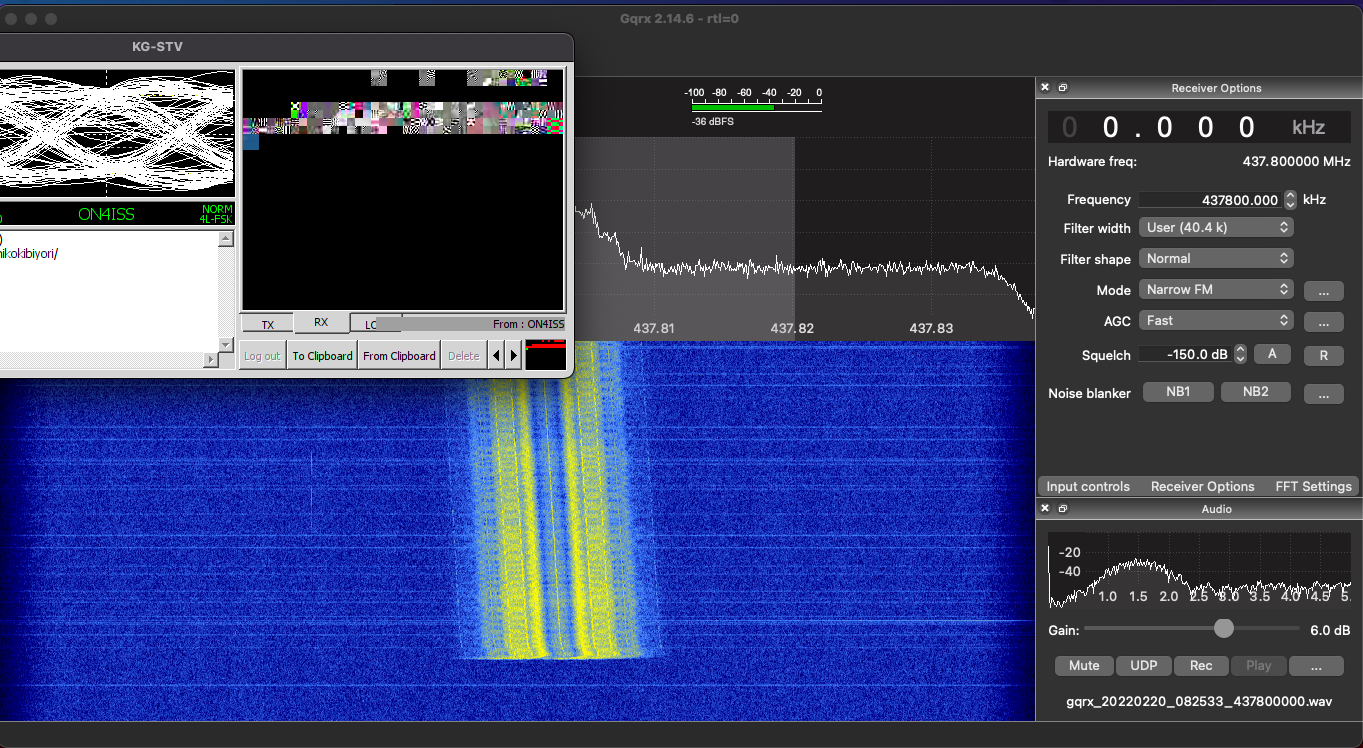 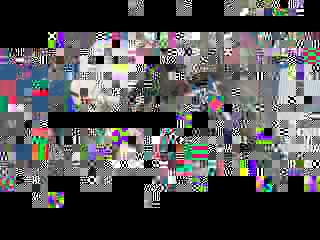 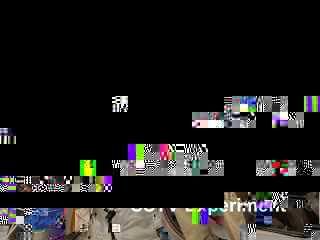 Hopefully ISS SSTV will become more frequent, although I’d prefer them to stick to the usual dedicated frequency rather than use the voice-repeater. Just in case though I’d still like to make some improvements to the 70cm QFH for the future:

After another day I have managed to reduce the SWR from 3 or 4 down to 1.07, through various manipulations while hooked up to a nanovna viewing the SWR trace.

I’ve an LNA ordered and then I’ll mount it and listen to the voice repeater downlink the next time the ISS is flying a decent arc and we’ll see how effective the antenna is now in its new form. I’d be interested to see if there’s any noticeable weirdness around its radiation pattern now.