A Walkthrough of the Sunset:Dusk VM from Vulnhub

This machine is full of rabbit holes if you spend to much time in one area, so for that reason alone it’s a great exercise in re-evaluating your progress occasionally. As always, we begin with our nmap scan to view available ports:

There are quite a few possibilities open here and some do leak information, but nothing we don’t find out later (For example, the SMTP port can be used to verify users present on the system)

Port 80 is a default apache install, so we move next to port 8080 which promises so much command injection of path traversal, but is really a simple php script given the contents of its home directory, but we’ll still use it later:

Getting our first shell 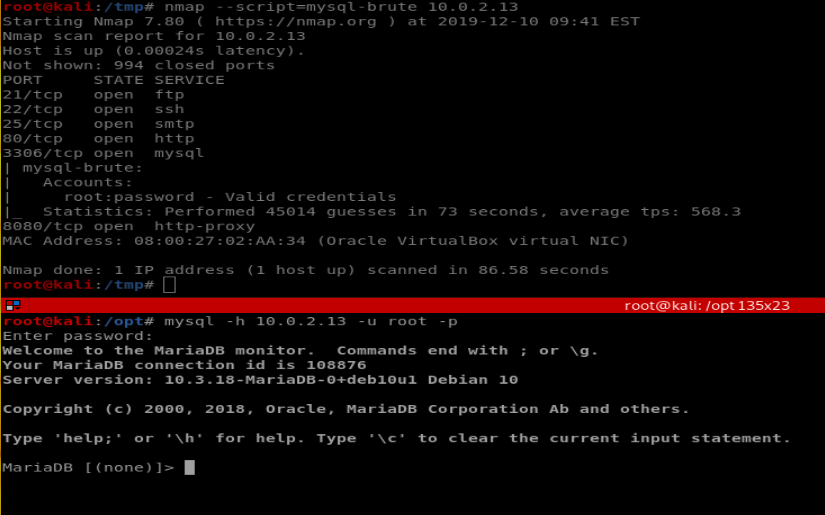 So we’re in the database, let’s see what’s in there; if there are other users in there we’ll be able to find their passwords too:

Nothing! the database is just empty except for the mysql root user, which isn’t too helpful. But thanks to some atrocities such as OUTFILE we can write dodgy code to the local filesystem, such as this simple shell. Remembering back to the directory listing on port 8080, we have a location where php files are executed (/var/tmp)

the command for this in copyable format:

and we can now revisit the listing on port 8080 to see if it has saved:

give it a quick check:

and then we can try and execute something intrusive. launch a netcat listener with

and then call the script from the server and tell it to connect to our listener:

and watch our listener connect:

and we can navigate to our first user flag:

We can see what our user can do to escape into another user:

What this means is that without using a password for our sudo (since we don’t have one), we can execute the three binaries listed as if we were the local user dusk

I found THIS article which tells us that we can use make to invoke a shell, which in this case will be as the dusk user:

And now we have our dusk user environment:

From the screenshot above, we see that the dusk user has access to the Docker group. Docker has a few well-documented privilege escalation routes, I used the example HERE to create my command:

Which will run docker and mount the local root directory which contains our flag: